Mr. Michael Graff has been in Japan for 18 years, majored in biology and cultural anthropology in university, and has devoted himself to research on ethnology. His research is based on the Native Americans of North and South America, with particular interest in the Indigenous peoples of his home state of Kansas. Mr. Michael Graff is also a teacher for the English classes offered at the lounge, and this was the first time he gave a lecture about Native Americans to us. The event was held during a quasi-state of emergency, with 24 participants and 6 staff in attendance. We stressed the need to sanitize, check temperatures, ventilate, and limit the number of people attending the event.

While we often imagine horses, bows and arrows, and “Indians” when we think of Native Americans, the reality is that they are spread all across the North and South American continents and exist with many different genetic identities. Moreover, we can also see how diversity came about by understanding that groups of Native Americans developed various lifestyles to adapt to different climates and natural features of the North and South American continents.

Lecture in Plain English, No. 26 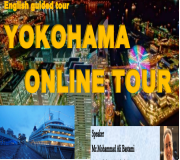 This was the first “Lecture in Plain English” to be held as an online event. The speaker, Mr. Bastami, is from Iran. He is not only an English conversation teacher at the lounge, but also has experience working at the Islamic Museum of Art in Tehran, as an international conference coordinator for the Iranian Ministry of Culture, and as a Persian language announcer for NHK Radio Japan.

He has been in Japan for over 20 years, with a long time spent living in Yokohama. He was able to introduce well-known places such as Minato Mirai and Sankei-en, deeper spots such as Kogane-cho, interesting museums, and hole-in-the-wall cafes, ramen shops, and other spots that aren’t featured in tourist guidebooks using simple English, pictures, and videos.

The participants admired Mr. Bastami’s detailed knowledge of Yokohama’s sightseeing spots and history, expressed that there were several things about Yokohama that were new to them, and that the lecture was a good plan. It seems that everyone had a great time.

Lecture in plain English, No. 24

“Rediscovering Mexico – the land of many charms!”

Mr. Alfredo Esquivel was born and raised in Mexico and moved to Japan in 2014 to pursue doctoral studies at the Tokyo Institute of Technology, where he is currently specializing in DNA research.

Alf, who was born and raised in Mexico, started by talking about Mexico’s abundance of nature, history, culture, and introduced the ancient civilization and pyramids of Teotihuacan, the unusual festival “Day of the Dead”, and other facts about Mexico.

In the second half, he spoke about his grandfather who he lived with in Mexico City, and introduced the Catholic church’s beautiful decorative goblets, silverware, and chandeliers, which were created through traditional methods and metalwork techniques inherited during the 300 years of Spanish colonial rule.

Lecture in Plain English, No. 23

During this session of Mr. Takahashi’s English Conversation “Skill Up” Lecture series (No. 9), participants had the chance to translate Japanese from movies and TV into English. In the first half, they translated simple, everyday conversational phrases like “I knew it!” and “that really suits you,” and took part in conversation with each other.
After the break, participants selected some light material from Japanese variety programs and studied some points about translation into English.
Translation of conversation is not just word for word, but also takes into consideration the situation and feelings involved. They learned that it’s possible to express natural English expressions using simple vocabulary.
During this “Skill Up” session, participants were able to grasp some important points about translation and expressed that they had a great time. We received a lot of helpful feedback from them.
For the next session, we are planning to look at well-known English language songs to try to understand the emotions and meanings found in the lyrics.