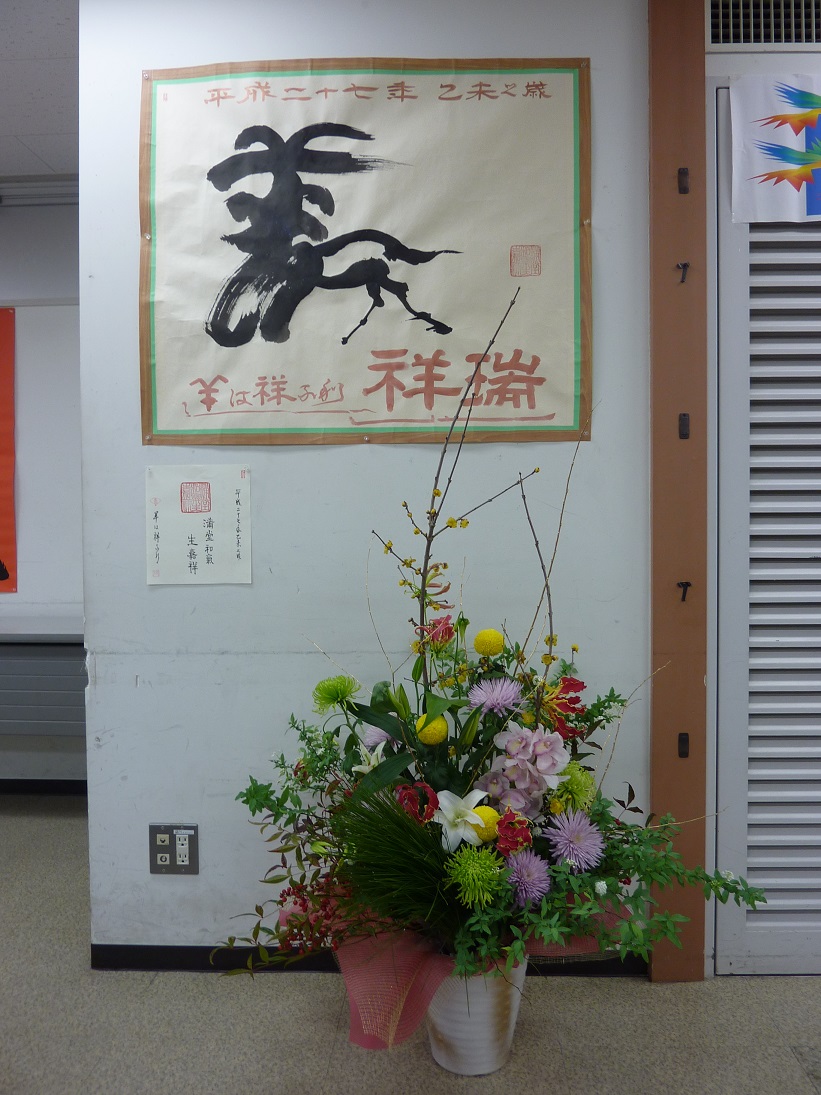 We had annual New Year Gathering.

Date; Jan.11 (Sun), 2015 from 10:30am to noon
Place: Aoba Community and Cross-Cultural Center
Host: Yokohama Aoba International Lounge
We had annual New Year Gathering 2015 on January 11th (Sunday) to celebrate the beginning of the year.  Even though it was in the middle of three consecutive holidays, 87 people including staffs got together enjoying the mild weather.  A beautiful calligraphy of kanji character “Sheep”, flora arts, and New Year toys such as battledores and tops were displayed.   A Chinese young lady and her daughter joined in Japanese kimono, which added the gathering flowery loveliness.  As a mini event, we enjoyed the performance of Libre Saxophone Quartet consisted of young child raising mothers.  The performance began with the famous classical medley by Mozart and ended with “Let it go” from the big hit, “Frozen”.  We all gave a big hand to the impressive performance.   We also sang “Furusato” together accompanied by saxophones.  After the performance, we enjoyed endless conversation with each other over drinks and snacks as usual. 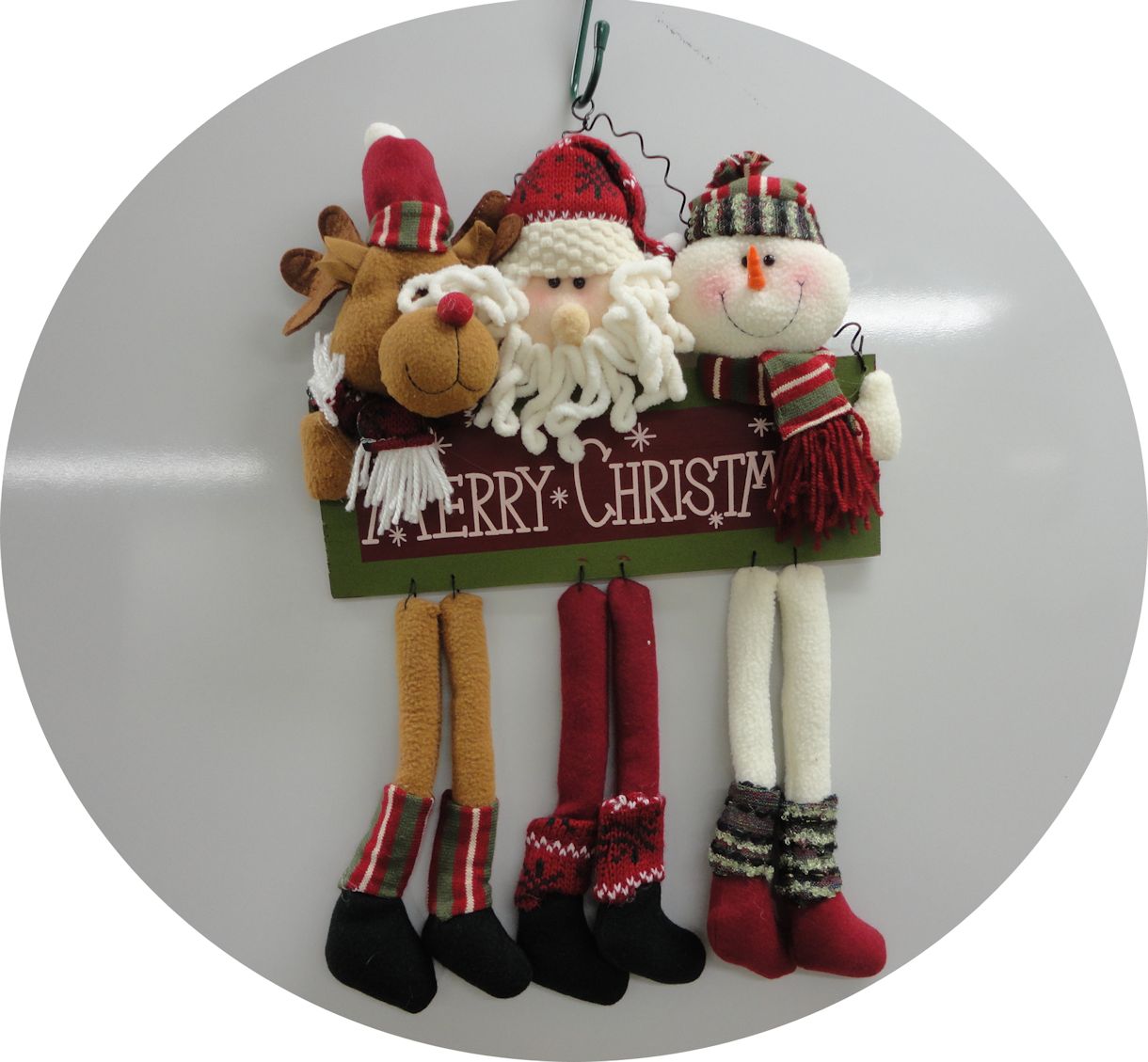 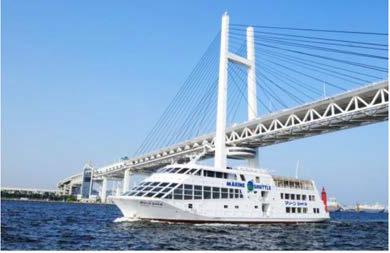 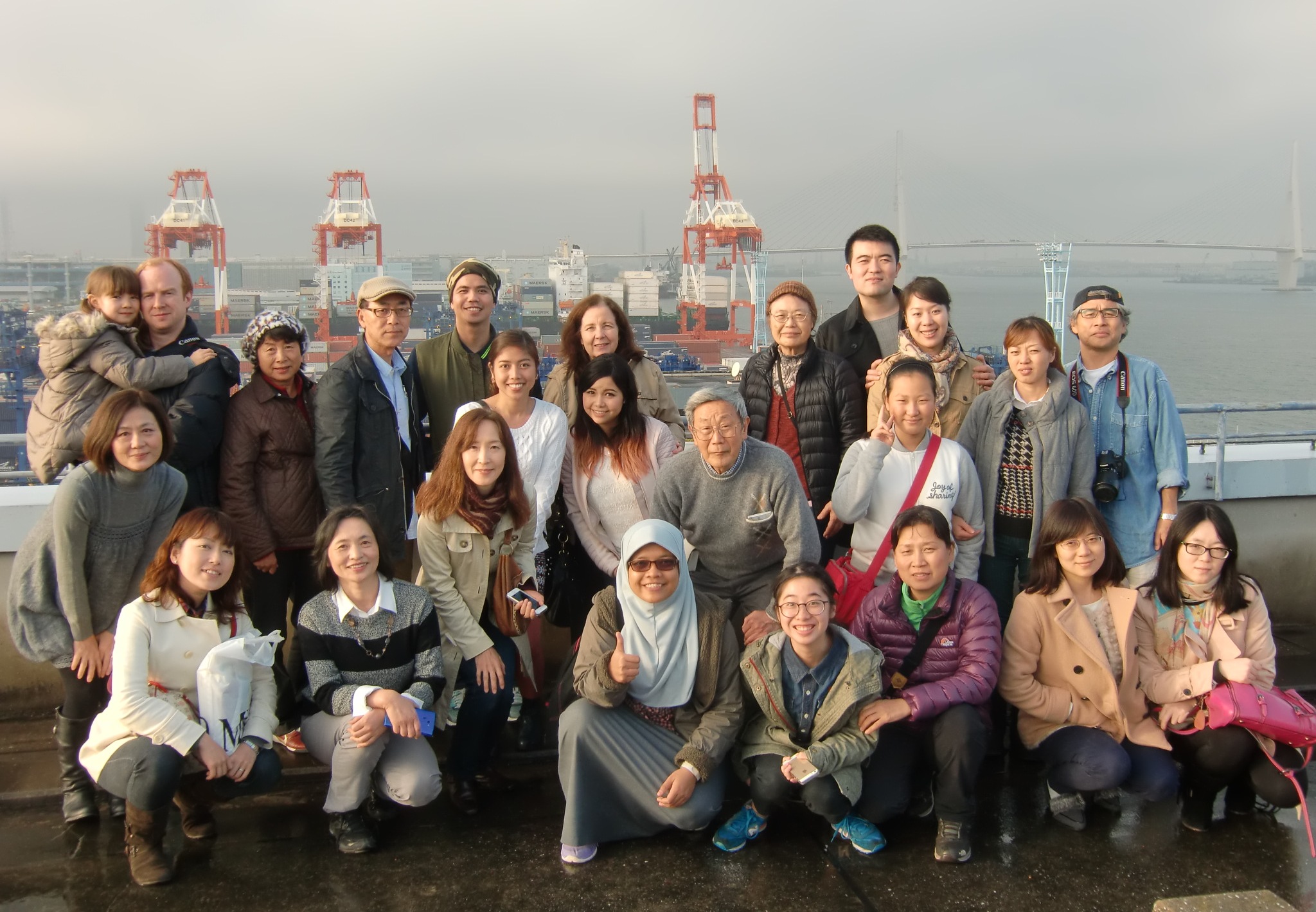 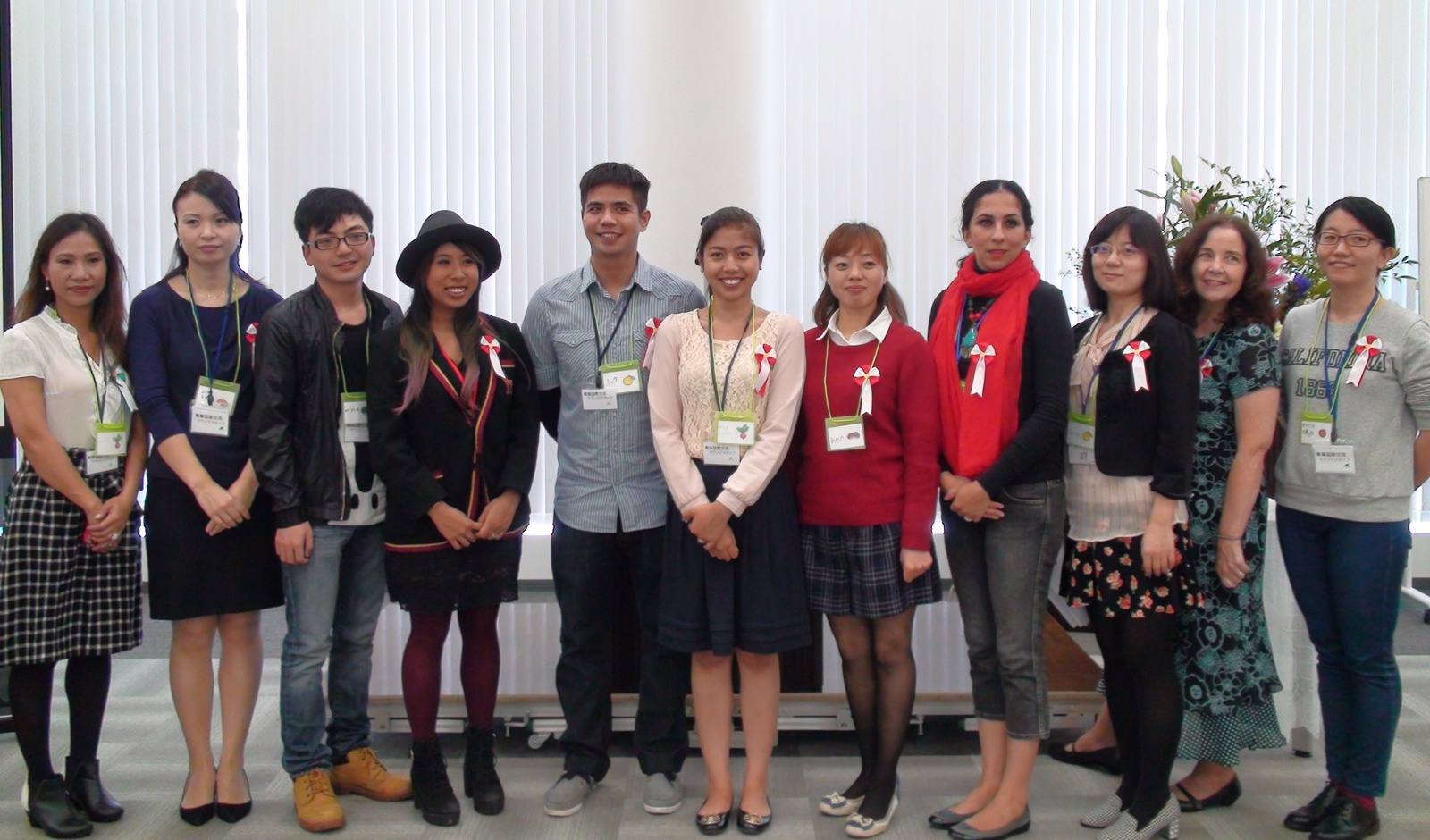 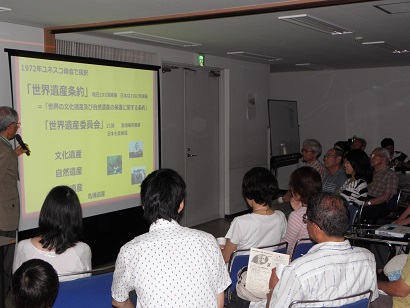 Date : July 1 (Sun) from 10:30am to noon
Place: Yokohama Aoba International Lounge, Rooms No.2 and No.3
July Morning Coffee was held in the Tanabata (Star Festival) atmosphere at Yokohama Aoba International Lounge where a bamboo branch with paper strips and ornaments to celebrate Tanabata was decorated.
Since Takaoka Silk Mill in Gunma prefecture was formally registered as a world heritage last month, the mini event was the presentation about world heritages by Lounge staff. World heritages were introduced using power point slides and we challenged ourselves with quiz about world heritages.  After that, we enjoyed friendly conversation as usual.

Discussion in plain English No.34 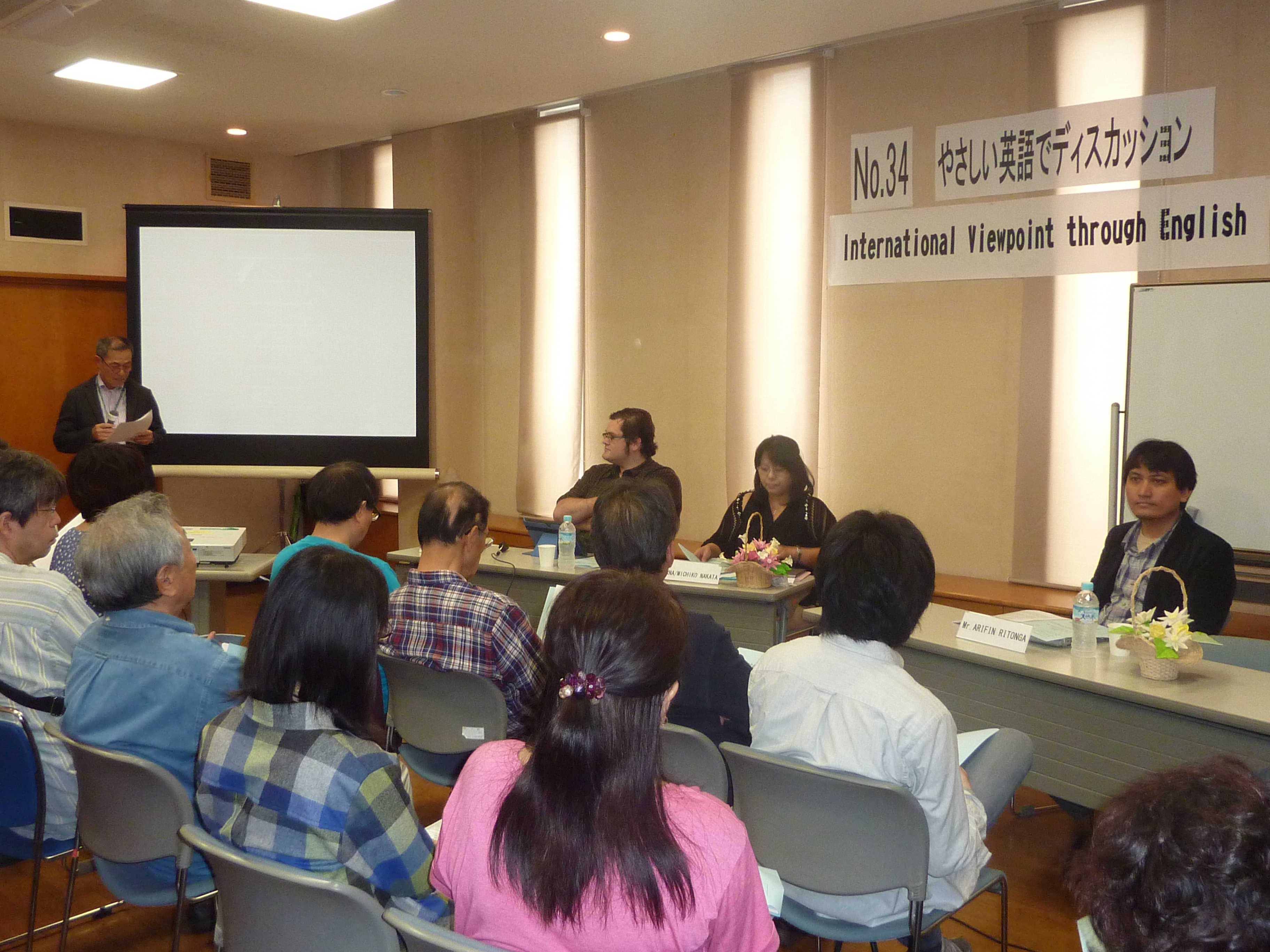 Discussion in plain English No.34
1. Speaker: Mr. Maso Beninger (from USA)
He came across Nintendo game when he was a child.  Since then, he has been fascinated with various Japanese games and Animations.  He gave us a presentation about charming feature of Japanese games and animations and how they are accepted in USA.
2. Speaker; Mr. Arfin Ritonga (from Indonesia)
He gave us his suggestion that we have to break out from Galapagos syndrome by respecting diversity.  After the speech, vigorous questioning and discussion were held. 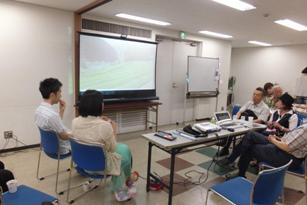 Date; June 1(Sun), 2014 from 10:30am to noon
Place: Aoba International Lounge Room No.2, 3
32 people participated in June Morning Coffee. As usual, 12 new participants introduced themselves, then we had a mini event “Tips for overseas travel”. Our stuff presented how to realize inexpensive overseas travel of your own schedule using the English knowledge we studied at junior high school. We discussed how to plan a fun overseas travel, how to make a reservation, international exchange through overseas travel, a personal travel that can be realized for half the price of that of a package tour by travel agencies, and how to make friends of all over the world with your smartphone. After the presentation, all participants enjoyed talking about overseas travel. 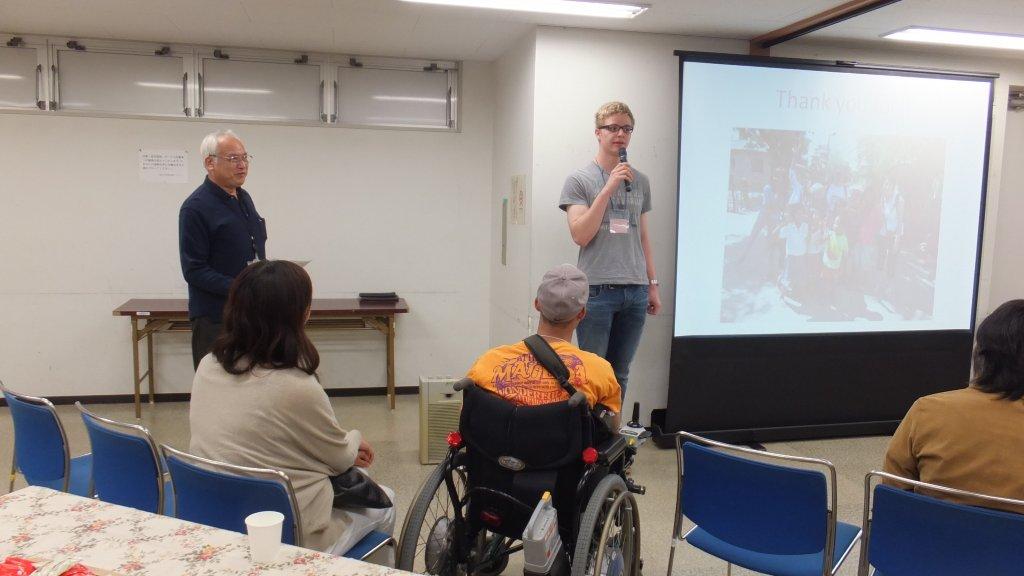 37 people perticipated though it was in the middle of Golden Week.     At the beginning of the meeting,
< new perticipants indtroduced themselves as usual.    As a mini-event, we listened to the report of volunteer works
in Republic of the Philipines, "Children who can not afford to go to school."  We all listened attentively to the
report about children who live in poverty in Republic of the Philipines.   Each person should be impressed
somehow.   After the mini-event, we all enjoyed free conversation with each other until the end of the meeting..

Event for children "Greetings in Pantomime from Spain"

"Greetings in Pantomime from Spain" 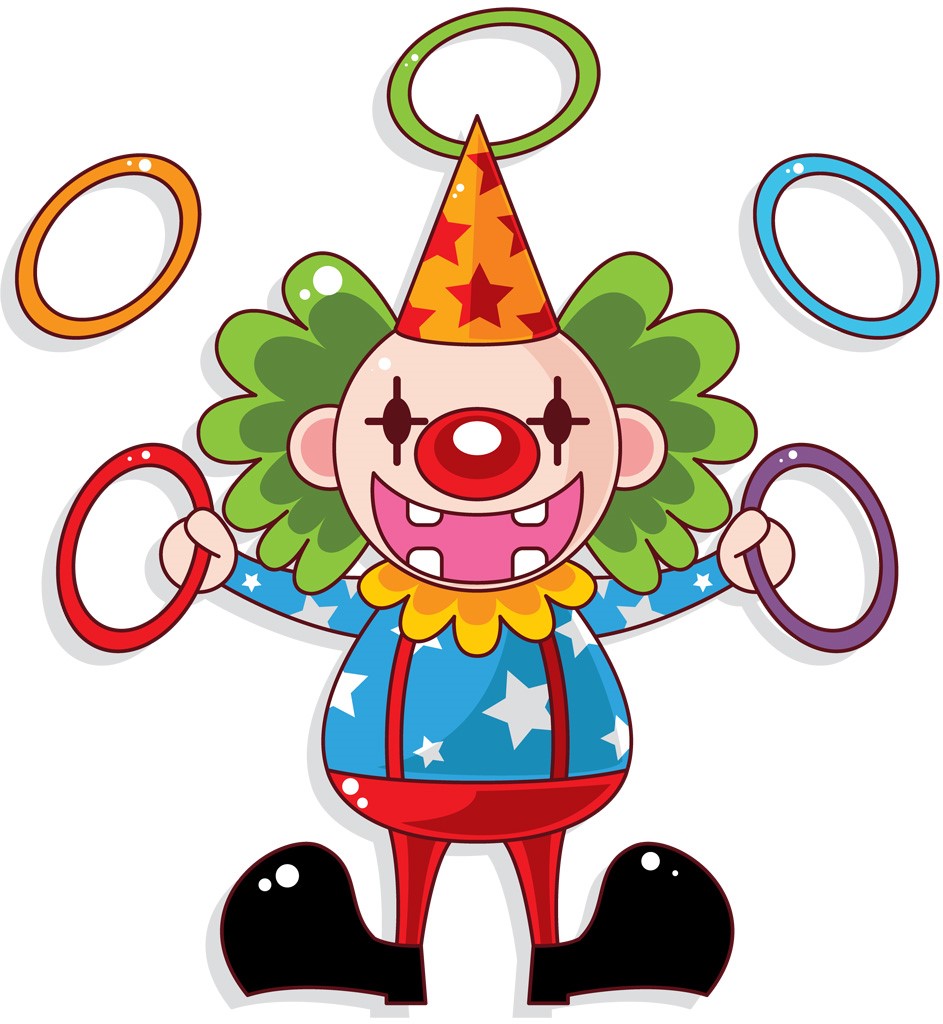 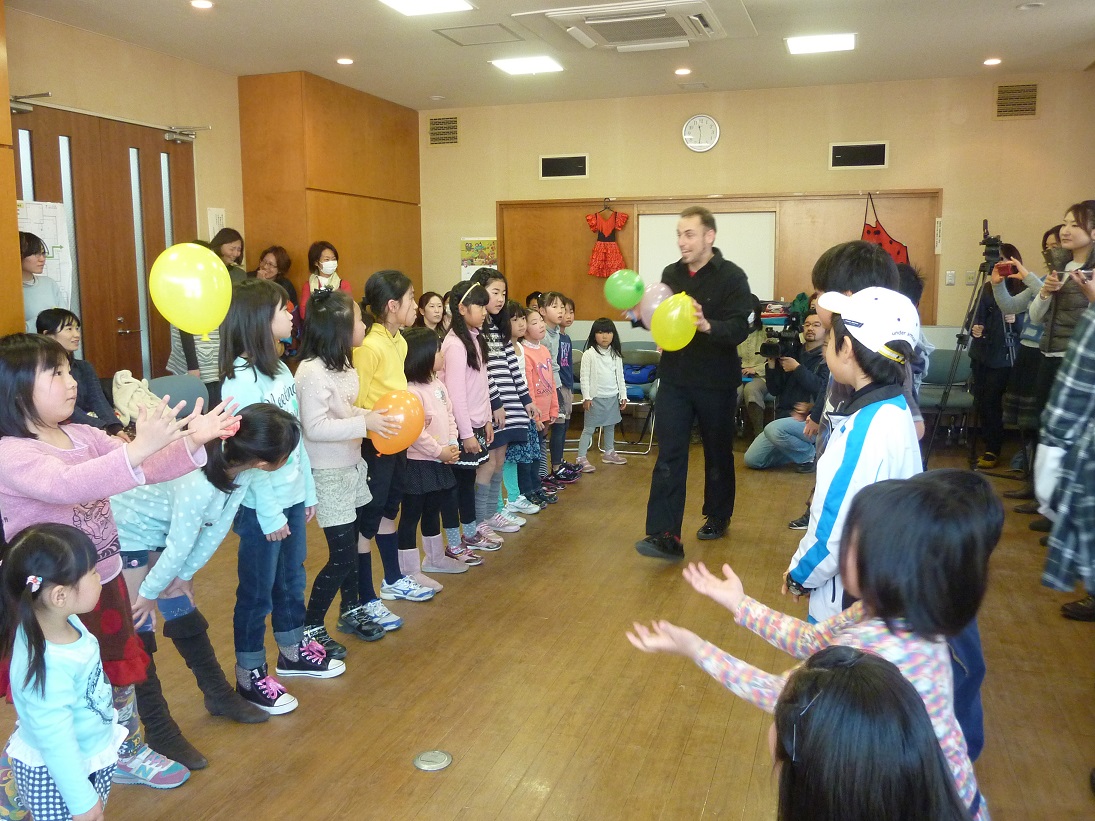 " Greetings in pantomime" for children was held.  Mr. Miguel from Spain, who is an actively working kindergarden teacher and a street entertainer, and Ms. Yumiko performed in the event.   We enjoyed studying Spanish greetings and a three-choice-quiz about Spanish culture.   It was a very nice event to know about Spain, a non-English speaking country in long distance.   After that, the children experienced making juggling balls.  We were a little bit surprised to know that a juggling ball can be made of a baloon and sand for cat litter , we learned that it has good weight for juggling.   After studying a trick to juggle, many children could juggle. In the last 30 minutes, Mr. Miguel and Ms.Yumiko performed street performance.   We, children and adults, all enjoyed their big performance with cheers and applause.  At the end of the performance, Mr. Miguel and Ms. Yumiko gave us a big surprise.  They gave us baloon arts such as swards and Anpanman figures.  We all had really wonderful time.

더 읽기: Event for children "Greetings in Pantomime from Spain" 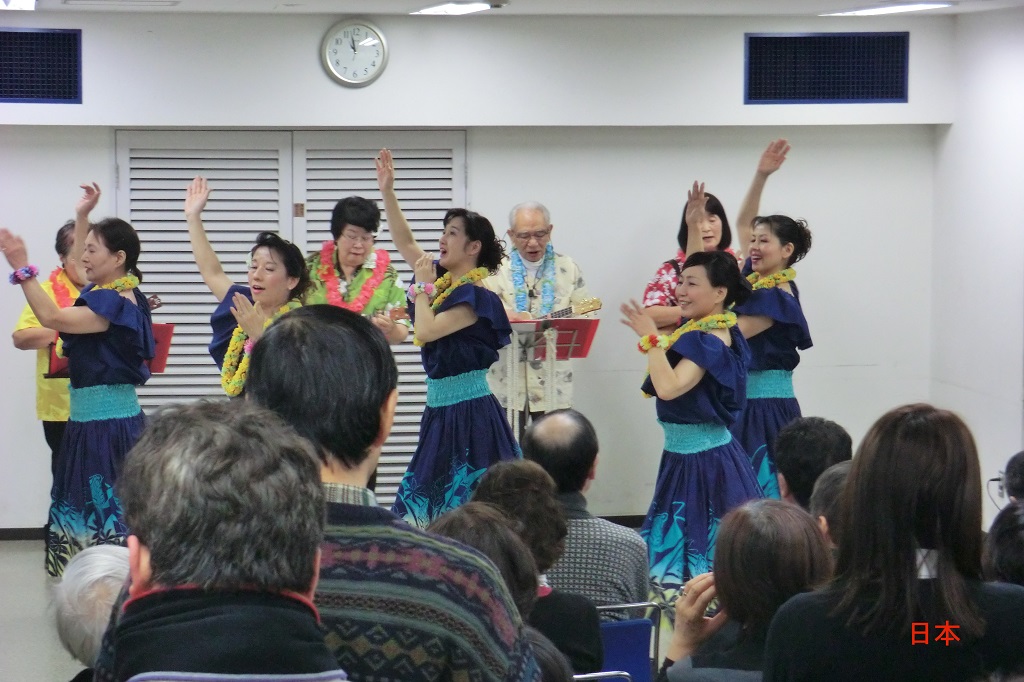 Date & Time : Feb.2(Sun), 2014. 10:30-12:00
Place : Aoba Community and Cross-Cultural Center; Conference Room 2 and 3.
More than 50 people attended the Feb. 2 Morning Coffee．In the begininng of the event, they started shaking hands with each other,. This broke the ice and all were soon relaxed.
The Performance was started in a friendly atmosphere.
After the new comers' self introduction, we enjoyed seeing a Hula Dance by Hula Maui and Ukulele being played by the Aobadai Ukulele Friends as a mini event.
Four students from Toin University of Yokohama joined and assisted the event as members of staff.

Annual New Year party was held at Yokohama Aoba International lounge celebrating the start of the year.60 people  including lounge staffs joined the party on the final day of New Year Holidays.Various New Year's decorations such as a calligraphic kanji character of "horse"(it is the year of horse) were put on the wall of the room of Aoba International Lounge We all enjoyed the mini event,  Ａｒｐａ ( Paraguayan harp) concert played by Miss Arisa Matsuki. Big applause erupted at the end of each music.  We were all touched and relaxed by the beautiful sound.Even after the performance many people continued talking with Miss Matsuki asking various questions about Arpa.Cheerful conversation continued over drinks and snacks until the end of the party.Please look at the picture.  Looks fun, doesn't it? 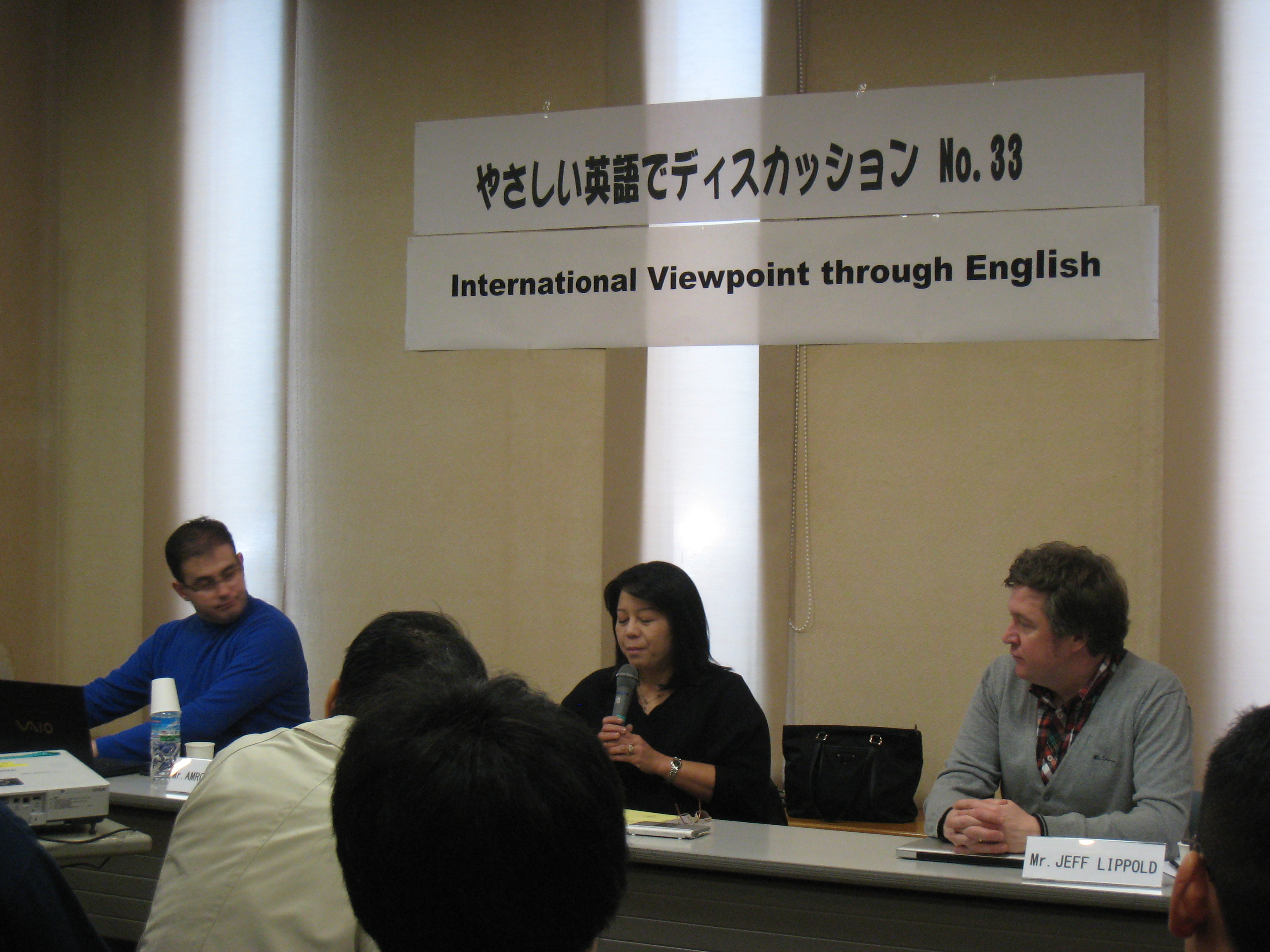 Date&Time:Dec.1(Sun), 2013. 14:00-16:00
Place : Aoba Community and Cross-Cultural Center, Conference Room 5.
Topics 1:"My Earthquakes experience in Algeria and Japan.", lectured by Mr. Mohamed Amrouche from Algeria, who is studying about the earthquake at Tokyo Institute of Technology.
Topics 2 "Tokyo 2020： How Japan needs to communicate to the world.", lectured by Mr. Jeff Lippold from Canada, who is the marketing director. After their speeches, we exchanged our views among all participants.
Click her for more detail. 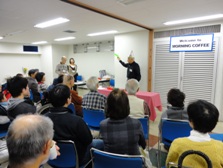 Date&Time:Dec.3(Sun), 2013. 10:30-12:00.
Place : Aoba Community and Cross-Cultural Center, Conference Room 2&3.
New comers from Egypt and Paraguay joined Morning Coffee and introduced theirselves with interesting topics. After special performance at Magic show as a mini event, performers were greatly applauded by the attendants and some of them had learned how to play magic and enjoyed very much. 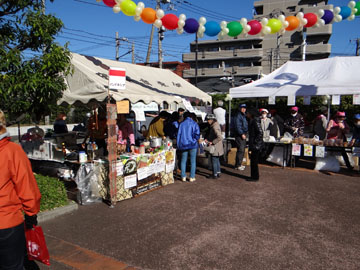 There were many fun events such as international exchanges, presentations by activity groups, and community exchange activities. The 9th Community and Cross-Cultural Center Festival was held and lots of people gathered. Many fun events hosted by Aoba International Lounge under the theme of  "International Exchange and Understanding with each other from each nations and community". 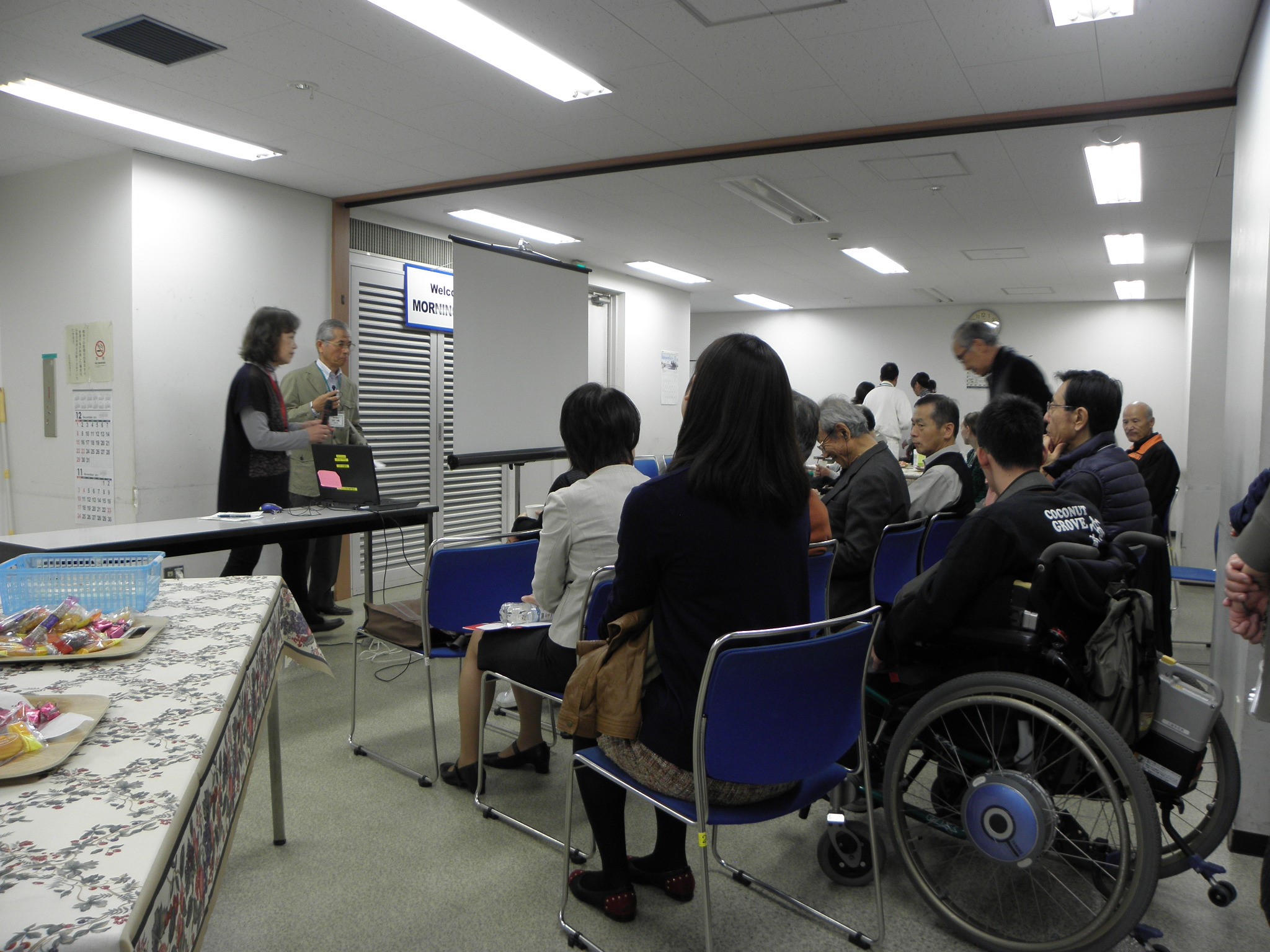 Speakers was moved from Namie-town in Tohoku district and moved to Aoba, and made a valuable speech. The theme of the speech was on Aftermath of the 2011 Tōhoku earthquake and tsunami and how to prevent from the disasters.

Visited Yokohama Meusum to see Yokoyama Taikan.also and we also enjoyed at nearby Tokyo Gass Showroom. 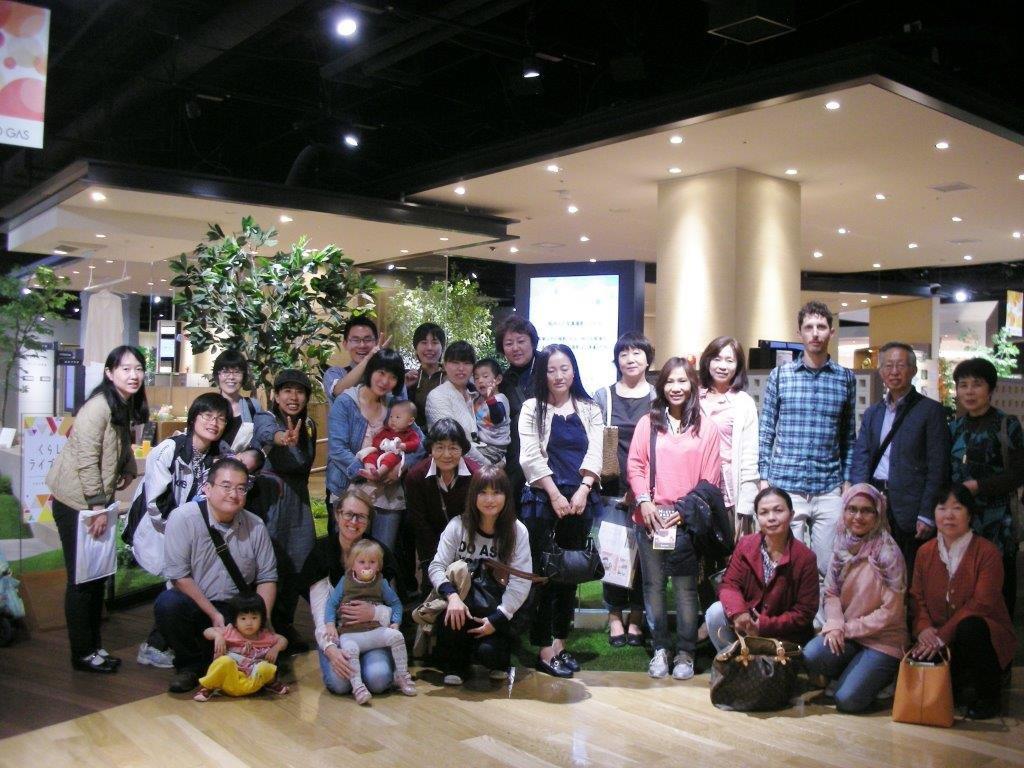 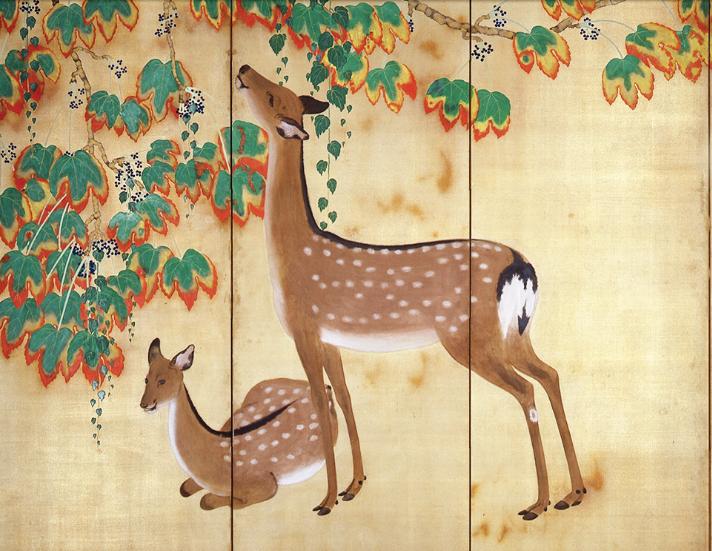 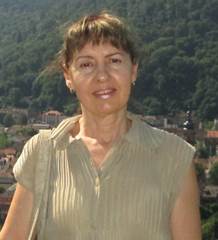 "Frederic Chopin in his youth" lectured by Polish woman.
Date&Time:Oct.26(Sat), 2013. 14:00-16:00.
Place : Aoba Community and Cross-Cultural Center, Conference Room.
Aoba International Lounge hosted the lecture meeting inviting Ms. Bozena Machida, graduated from dept of Mongolian studies at University of Warsaw in Poland  She lived in several areas of Japan and also lived in Vienna, Moscow and London due to business of her husband.